http://www.binghamuni.edu.ng/index.php | The main purpose of ECWA, “Bingham University Karu” was to meet the daring need for high quality Secular Education which recognizes and integrates the moral and spiritual values on which the Christian faith is founded as well as focuses on entrepreneurial studies in order to promote self-reliance among graduates of the University.

Bingham University, established by the Evangelical Church Winning All (ECWA) in 2005 was conceived on the ruins of public universities in Nigeria. Its founding fathers, visionaries within the various Executive Councils, as well academics of ECWA extraction, looked back to the golden age of mission education with its focus, purposefulness, and high quality. It was the desire for meeting the soaring need for not only quality, secular education, but education that recognizes and integrates the moral and spiritual values on which the Christian faith is founded which fueled its establishment. Recognizing the importance of the technological revolution of the 19th and 20th centuries, Bingham University is determined to build a technology-driven institution of the 21st century.

2. Vision, Mission, Core values and Goal
The vision of Bingham University, Karu is to transform Nigeria into knowledge and skills – driven society (Prov. 29:18).
Our mission for accomplishing the vision is to produce men and women who will catalyze the revolution in self-reliance at all levels of a Godly society (1 Cor. 2:12-12).
T 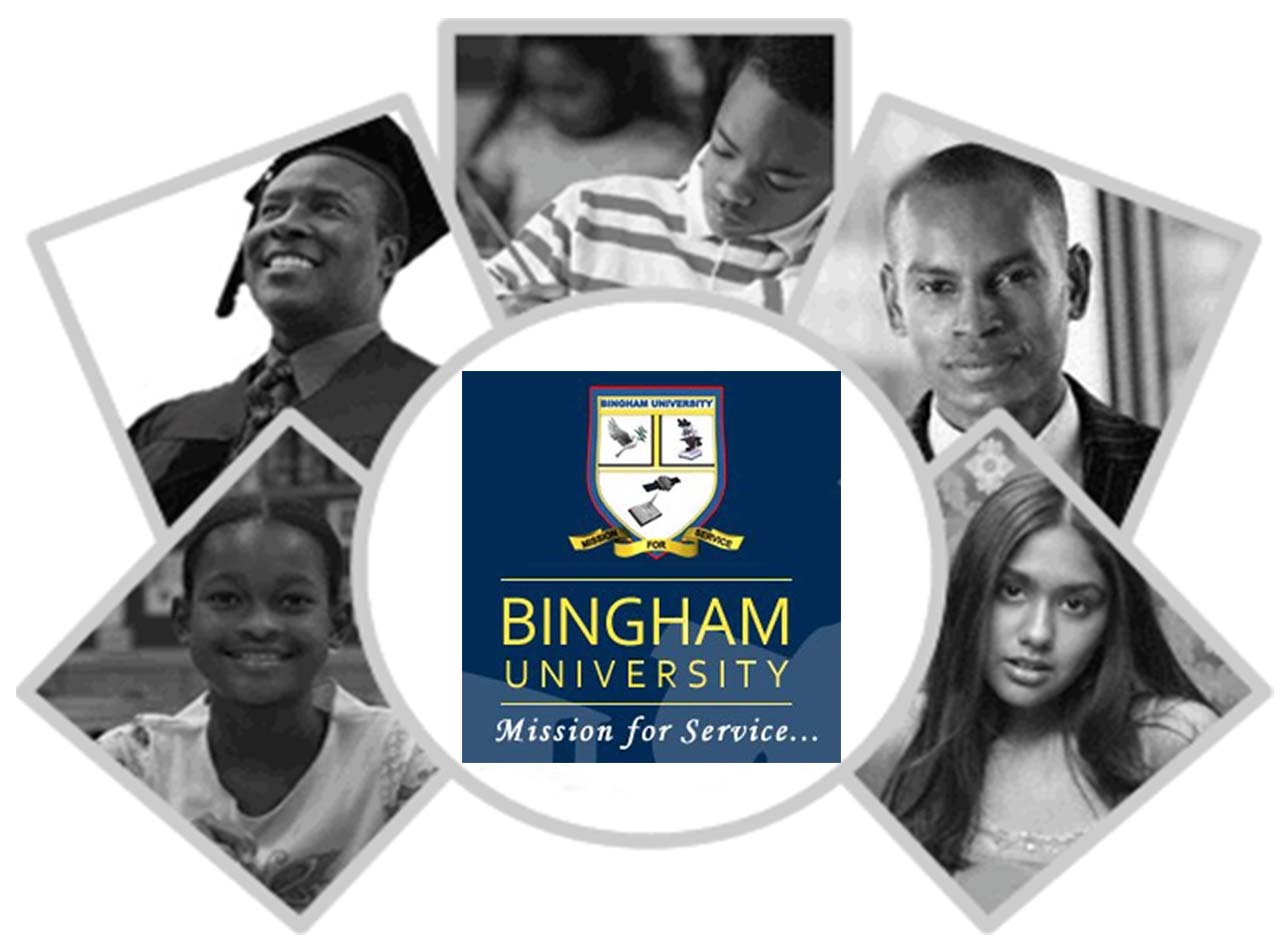 he core values for Bingham University, Karu are Christ-contentedness, people-orientation, excellence, purpose-driven life and adaptability to a changing world (Rom. 12:2-3).

Bingham University’s goal is to produce total men and women equipped to affect their generation positively for Jesus Christ, serving humanity in ways that are glorifying to God and dignifying to humanity (Prov. 29:18).  Our motto is, ‘mission for service’ (Mark 10:45). The motto emphasizes the type of knowledge and skills, which the university impact on its students. The ultimate goal is to produce graduates who would see themselves as a task force out to serve the society.

3. Commencement of Academic Programs:  Temporary to Permanent Site
Academic programs of Bingham University began in May 2006 at the Jos ECWA Theological Seminary temporary site and moved to its present permanent site two years after, precisely in March 2008 to Karu – Nasarawa State – Nigeria at the outskirts of Abuja, the Federal Capital City.  Indeed the feat of moving to the permanent 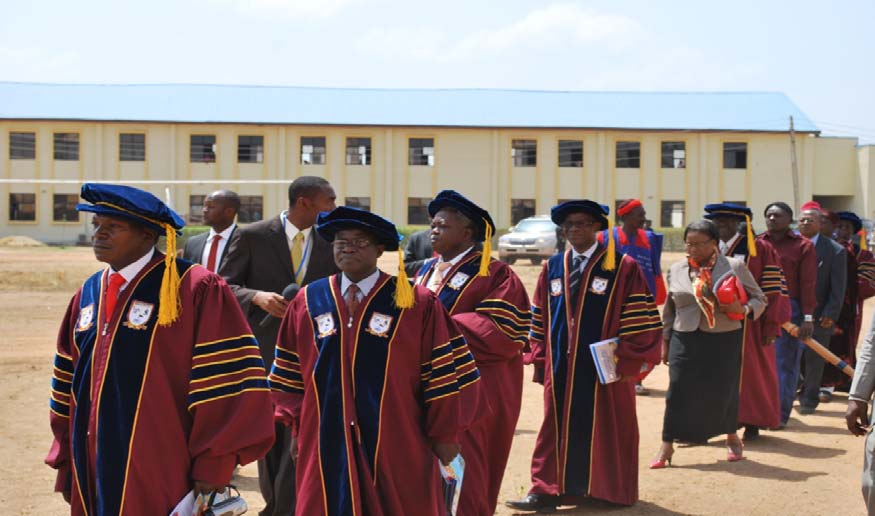 site at such a brief moment of the University’s commencement is uncommon in the history of Nigerian Universities where many first and second generation government funded universities in the country have not fully moved to their permanent sites after decades of their existence.  To the glory of God, the virgin land of October 2006 with no single building has now been transformed into a beehive of academic, professorial and Christian activities, courtesy of successive ECWA leadership, members and friends of Bingham University, Karu.

4. Academic Programs and Accreditation
As with all other Nigerian Universities, Bingham University’s admissions are through the Joint Admissions and Matriculation Board (JAMB) combined with a post-UTME screening exercise.

5. Information and Communication Centre (ICT)
ICT development of the Students has a strategic focus in Bingham University. The University has in place a state of the art ICT centre with a student portal for integrated services developed and maintained by the versatile staff of the University’s Computer Science Department who offers uninterrupted service for the learning comfort of our students.

6. Library Facilities
The University Library works in conjunction with the ICT Centre to provide the Electronic Library Services, giving the students and other staff users access to a wide range of academic resources, including the robust NUC virtual library.
Bingham University Management is constantly working in collaboration with her partners and friends at home and abroad to ensure the library is up to date at all times.

7. Students’ Welfare
From an initial intake of 124 students in May 2006, the University currently has a student population of about 2000 from all parts of Nigeria and beyond, pursuing their various programs.  All students are resident on the campus.  The University’s Management has out-sourced controlled catering services to both students and staff at affordable cost.  There are also modest sports and recreational facilities on campus for the physical fitness of students and staff.

The University has a comprehensive health centre at Karu that provides medical services to students and staff as well as the surrounding communities.  Currently, the centre provides immunization services to children in addition to family planning services to women from the surrounding villages as part of the institution’s corporate responsibility to its host community and those around.

9. Chaplaincy
Bingham University runs a 24 hour Chaplaincy service with three Chaplains assisted by some lecturers to cater for the spiritual needs of the students.  A compulsory Bible Study Course holds for two hours every week from 100 to 300 level.  A pass in this course is a pre-requisite for graduating from Bingham University.  There are also compulsory Chapel hours on Mondays, Wednesdays, Sundays and most Saturdays.  Students are also distributed into mentorship groups under dedicated staff to provide sound Christian mentoring.

Students are also encouraged and supported to build prayer cells with their roommates.  In addition, the Chaplains assisted by some staff conduct room-to-room evangelism once in a week to strengthen the faith of students as well as helping those who have not made their faith to do so in the Lord Jesus Christ.

10. Students’ Discipline
The University operates strict disciplinary tenets which are contained in the institution’s student handbook.  It prescribes behaviour and dress codes acceptable to the University and the consequences of committing infractions against the regulations,  In all, taken in conjunction with the efforts of the Chaplaincy, the regulations help not only to improve behaviour of students to become more disciplined but also to help them grow to be more like Christ.
Violations are met with appropriate sanctions always after a fair hearing is given to the alleged offender.

11. Security
The University appreciates God for being its security.  Efforts have however been made to put in place a structured security system with measures to secure life and property on the campus. A Police station is under construction on the campus.
Plans are already going on to build a block fence around the University mass of land 259.88 hectares to further enhance security.

12. Success Story
Bingham University Karu within six years of its commencement of academic activities has graduated three sets of students who excelled in their various academic courses of studies.  The University is most grateful to God for turning out graduates, men and women who have not only done well academically, but have grown both

physically and spiritually as children of God who will continue to hold integrity as their watch word in the midst of a perverse society. We expect them to shine for God in their future endeavours by God’s grace.
The University also held its first convocation ceremony in February 2012 where certificates were presented to the graduates.  The occasion also featured the presentation of honorary degrees to some distinguished Nigerians whose exemplary godly life styles have been a model to the younger generation.

Wow, God Loves Even Me!