Play Pause Unmute Mute
The film is uneven, but Joy knows just who she is. (Twentieth Century Fox Film Corporation)
The text at the beginning of Joy, the latest film from director David O. Russell (American Hustle, Silver Linings Playbook), says it is “inspired by the true stories of daring women . . . one in particular.”

Twentieth Century Fox Film Corporation
Jennifer Lawrence, Edgar Ramirez, Elisabeth Rohm, Dashca Polanco, Isabella Rossellini, Robert De Niro, and Diane Ladd in 'Joy'
That “one” is Joy Mangano, played here by Jennifer Lawrence, who is always fun to watch and certainly holds the film together. The character and her story are based on Mangano’s true story of inventing the Magic Mop, hawking it on the still-new QVC, and overcoming difficulty to become a business mogul able to support other inventors and entrepreneurs.
Russell makes weird and frenetic movies that aren’t to everyone’s taste. They lurch around a bit and at times seem more infatuated with style than substance or coherence. That shows up again in Joy, which is narrated by Joy’s grandmother (Diane Ladd) and includes a montage introduction and a couple early black-and-white scenes from a melodrama, shot in soap opera style. Soon we segue into a whirling-dervish madcap romp through Joy’s house, with Joy as the axis, populated by a motley crew of relatives: Joy’s two children and her grandmother Mimi; Joy's ex-husband (Edgar Ramirez), an aspiring singer who still lives in the basement long after the divorce; her mother, Terry (Virginia Madsen), who stays in bed and watches soap operas; her father Rudy (Robert De Niro, another Russell regular), who’s moving back in after his latest split—though he’ll have to share space with his ex-son-in-law, whom he sometimes-cordially hates. (Good thing he swiftly finds a new girlfriend in Trudy, played by Isabella Rossellini.) The family also includes Joy’s half-sister Peggy (Elisabeth Rohm), who manages Rudy’s auto repair shop and is by turns affectionate and undermining toward Joy’s efforts. 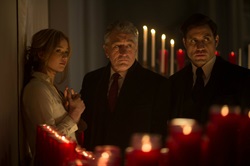 Twentieth Century Fox Film Corporation
Jennifer Lawrence, Robert De Niro, and Edgar Ramirez in 'Joy'
As it turns out, she learned that behavior from the family more generally. We come to understand that Joy was a gifted child with big aspirations and an active imagination, an inventor from her youth. But time and circumstance have left her, still young and vibrant, with a lot of mouths to feed and egos to placate. Those egos delight in tearing down her aspirations in the most passive-aggressive manner I can imagine (consider this your trigger warning).
But Joy is scrappy and persistent, and she fights her way onto QVC, still a fledgling network headed by Neil Walker (Bradley Cooper, of course). What follows is ups and downs, excruciating failure and exhilarating success, licensing debacles and mismanagement and tense negotiations. In Lawrence’s portrayal of Joy, she’s a tired, determined woman with a lot of charm and grit and desperation who can still be reduced by those she loves to a puddle of despair. What we’re watching is not the building of an empire, but a woman coming into her own.
That part of the film is cathartic and enjoyable, if unevenly told. Yet it leaves us with a lot of desires. For instance, I want a film about all the personalities around QVC, and around Mangano’s own later business ventures. Futures are hinted at that seem terribly interesting, enough that in this age of film-to-TV, you can’t help wonder if a series is lurking in someone’s mind. (Given how character-driven it is, the film would work splendidly, and probably be received more warmly by both audiences and critics, as an offbeat prestige comedic drama.) I want a coherently-told story; I don’t want the feeling of rushing from scene to scene.

Twentieth Century Fox Film Corporation
Elisabeth Rohm, Jennifer Lawrence, and Robert De Niro in 'Joy'
At the film's core is our favorite sort of story as Americans, a good old-fashioned pull-up-your-bootstraps, rags-to-riches tale of rising from humble circumstances through sheer force of will. And to tell you the truth, I was into it. By the end of Joy I felt strangely similar to the end of American Hustle—frustrated by the filmmaking, but enamored of the characters, except I didn’t feel dirty for rooting for the main character. In fact, I felt an affinity to her. I wanted to be like her. That’s the point: she’s a daring woman and meant to be an inspiration, and thankfully, she really is. (The real Joy Mangano, by the way, currently holds more than 100 patents.) 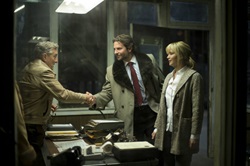 Twentieth Century Fox Film Corporation
Robert De Niro, Bradley Cooper, and Jennifer Lawrence in 'Joy'
And so, even though Joy never really seems to figure out what sort of a movie it is, it’s still a lot of fun to watch—mostly because the woman at its center knows exactly who she is.
Caveat Spectator
The film is rated PG-13 for brief strong language, which is exactly what it sounds like: expletives. Otherwise, it’s all family drama.

Alissa Wilkinson is Christianity Today’s chief film critic and an assistant professor of English and humanities at The King’s College in New York City. She is co-author, with Robert Joustra, of How to Survive the Apocalypse: Zombies, Cylons, Faith, and Politics at the End of the World (Eerdmans, May 2016). She tweets @alissamarie.