by Philip Jenkins | Supported by  The Pew Charitable Trusts |  In 1900, Europeans made up around a quarter of the world’s population. By 2050, that proportion will probably be closer to 8 percent. | (image: Amy Christian/ Oxfam)

To understand global changes in religion today and the potential impact on the borders of geography, population, and faith, we must first look at differential demographics—namely that some parts of the world are growing much faster than others.

The global population stands at 6.9 billion and should reach 9 billion around 2050, but that increase will not be equitably distributed around the world. Southern nations, especially in Africa, are growing very rapidly, while their northern neighbors—such as Europe, Japan, Russia, and the United States—are relatively static.

The demographic contrast between Europe and Africa illuminates this transformative shift. In 1900, Europeans made up around a quarter of the world’s population. By 2050, that proportion will probably be closer to 8 percent. Africa had about 130 million people in 1900. That number passed the billion mark by 2005 and, by 2050, could reach anywhere from 2 billion to 2.25 billion. In 1900, there were three Europeans for every African. By 2050, there should be three Africans for every European. That figure, incidentally, is misleading in one way, as many of the “Europeans” in 2050 will in fact be of African descent. By some projections, the African share of global population by 2100 could be 40 percent.

To take another focus, consider the nine nations that are on course to be the most populous in Africa by midcentury: Ethiopia, Nigeria, Congo, Uganda, Sudan, Tanzania, Kenya, Madagascar, and Niger. In 1950, the combined population of these nine nations was around 100 million, rising to almost 400 million by 2000. By 2050, they will have a combined population of 1.2 billion. That would represent a twelvefold increase in raw numbers in just a century. By 2050, six of the world’s 20 most populous nations will be on the African continent.

These demographic changes will inevitably have their impact on the world’s religious structures. The difficulty is, though, that religious patterns are far harder to quantify than those in other areas of life. We can be reasonably sure where the bulk of the world’s people will be living in 2050, but do we dare make statements about what they will believe?

Projecting demographic changes 40 or 50 years in the future seems like a risky venture, yet the process of Christian and Muslim expansion outside Europe and the West does seem inevitable, and the picture offered here is based solidly on current trends, religious and demographic. To borrow the remark credited to pioneering sociologist Auguste Comte, demography really is destiny. 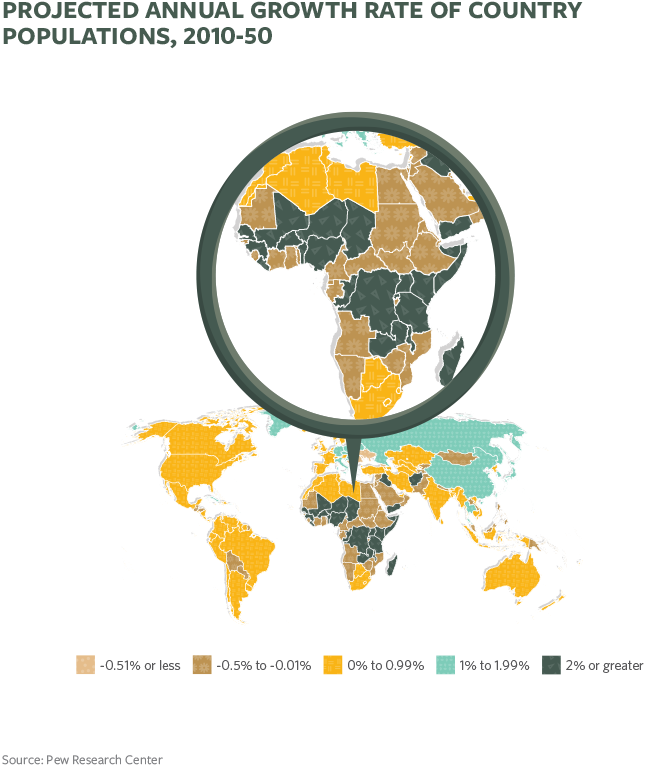 Although demography is far from an infallible crystal ball on the future of religious revivals and conflicts, trends in population growth and family do correlate strongly with religious attitudes. And while much of the world might be losing its attachment to religion—perhaps most clearly seen in an increasingly secularized Europe—these trends point to startling new significance for Africa in the world’s religious picture.

One of the key demographic trends in the modern world is the sharp global decline in the size of families. For example, since the 1960s Europe has undergone an epochal demographic revolution of historically low population growth—with an average of 1.4 children per woman in Italy and as low as 0.8 in some regions of Germany—and that shift has rippled through many other places to include Latin America and large sections of Southeast Asia and the Pacific Rim. Even countries that used to be regarded as the dynamos of population growth, such as India, are in transition. Particularly fascinating are the declines in several Middle Eastern nations. For example, in Iran, family size has dropped from an average of six to 1.8 children over the past three decades—a rate of decline much faster than what Europe experienced in the 1960s and 1970s.

Initially in Europe, the countries with the steepest declines in population growth also led the way in secularization, and the two trends are connected, although the chain of causation is complex. Declining population growth accompanies women’s emancipation and entry into the workforce, and usually results from a decline in traditional religious-based concepts of gender roles. In turn, smaller families reduce their ties to organized religious institutions, as fewer children go through religious school and First Communion classes. Ordinary lay people increasingly define their values in individualistic and secular terms, and are more willing to oppose churches on social and political issues of gender and morality. Already, much of Latin America is closely following European trends, and survey evidence suggests a comparable process of secularization in several nations, including Brazil and Argentina.

But this shift is not wholly global, and population growth persists in sections of the Middle East and South Asia, and above all in Africa. In 2015, birth rates of more than five children per woman in Uganda, Nigeria, and Ethiopia—and nearly five in Congo—suggest that this trend will not decline over the next few decades. This means that Africans represent a much larger share of the world’s population and that this share will continue to increase at least until midcentury. More tentatively, this demographic change should also mean that the strong religiosity so closely associated with African populations will continue and will increasingly spread beyond that continent.

Africans represent a much larger share of the world's population, and this share will continue to increase at least until midcentury.

These changes have wide religious repercussions. In 1900, Africa had substantial Muslim and Christian populations, with Muslims strongly in the majority. During the 20th century, both groups grew substantially, partly by demographic expansion, but also through evangelism and conversion. About half of black Africans joined one of the great monotheistic faiths, and they favored Christianity over Islam by a rate of 4-to-1.

Because of this, Africa is now home to some of the world’s largest Christian and Muslim communities. Ethiopia’s Christian population, at 6 million in 1900, will grow to a projected 100 million in 2050. In Nigeria, the population in 1900 included 4.2 million Muslims and 180,000 Christians. Today, the country claims about 80 million of each faith, and each should grow by another 100 million by 2050. By then, the 10 countries with the largest Christian populations will include several African states, including Ethiopia, Nigeria, Congo, and probably Uganda. African Islam has also benefited mightily from these changes. The World Christian Database suggests that in 1900, the African continent had about 35 million Muslims, or 17 percent of the global total. Today that figure has increased to 27 percent, and it may be as much as one-third by 2050.

Not only will there be many more African Christians and Muslims, but they are also likely to be active and devoted in their religious practice and strongly resistant to secularization. African religiosity emerges strongly in most surveys, even if it is not quite uniform. Nowhere are there significant minorities rejecting or questioning the religious consensus, especially not such fundamental assumptions as the belief in God. In modern times, by far the most important trend in African Christianity has been toward especially enthusiastic, charismatic, and Pentecostal expressions of faith. Many of the newer churches use highly entrepreneurial forms of marketing and evangelism to spread that faith, commonly employing the most advanced technology. Little-known in the West, one of the main expressions of popular evangelical faith in Africa is the Nigerian-based video industry. Since the 1990s, hundreds of popular religious and charismatic videos have appeared, teaching doctrines of deliverance and sanctification while reminding believers of the dangers inherent in occult dabbling. Nigerian Christian videos enjoy distribution throughout Africa on satellite networks and cable channels, and are also easily available in North America and Europe. What’s more, while African countries have experienced economic development and many are enjoying a growing and vigorous middle class, social ideologies are still strongly in favor of parenthood and family. And persistently strong population growth means that this tendency is unlikely to change anytime soon.

What happens in Africa is very unlikely to stay in Africa. The astonishing growth of Christians there means that Africans comprise an ever-larger share of virtually all of the world’s religious denominations. To quote journalist John L. Allen Jr., “During the 20th century, the Catholic population of sub-Saharan Africa went from 1.9 million to more than 130 million—a staggering growth rate of 6,708 percent. Africans started the century as less than 1 percent of the global Catholic population, and finished it at around 16 percent.” There are now over 200 million African Catholics, whose numbers could double by 2050, when they would constitute a quarter of all believers. That proportion will probably rise as the century goes on. In the Anglican Communion, traditional centers such as England, Canada, and the United States have been dwarfed by the thriving and expanding churches of Nigeria, Uganda, Kenya, and South Africa. A similar dynamic is at work in the Catholic world. These changes are presenting internal challenges to these denominations over teachings on human sexuality, family life, and marriage.

These African believers will have growing influence within the governing councils of great denominations—and will alter the world’s religious picture in other ways as well. A country such as Uganda, for instance, had 5.5 million people in 1950, a figure that could potentially increase to 80 million by 2050, and the question arises of how a country of limited size could accommodate so many people. The answer, of course, is that it will not, because so many of them will emigrate to other countries where aging populations stand in such dire need of new people to perform jobs and pay taxes. And when these Africans go, they will take with them their churches and mosques, their religious movements and customs.

That African diaspora is underway. African churches are now firmly established in the United States in such urban centers as Houston and Atlanta. Houston in some ways is the Nigerian capital of America, with at least 25 African churches, some on a very impressive scale. African churches are also thriving throughout Europe, including in some unlikely settings. The most spectacular example is the Embassy of the Blessed Kingdom of God for All Nations, based in Kiev, Ukraine, founded and pastored by Nigerian-born Sunday Adelaja, which claims some 50,000 (mainly non-African) followers in Ukraine alone. In Britain, Africans lead the nation’s four largest megachurches. And the Nigerian Redeemed Christian Church of God operates in dozens of countries, growing so widely and quickly that it could well become a new global denomination.

Today, some African-founded churches in Europe are even reaching out with new missions to the African homelands of their members’ parents, in what we might term “double reverse mission.”

Back in 1920, Anglo-French writer Hilaire Belloc surveyed the state of Christianity and made the grandiose (and arrogant) assertion that “The faith is Europe, and Europe is the faith.” He believed not only that Christianity was inextricably linked to Europe and to people of European stock, but that the faith was also an integral part of European culture. Quite possibly, in another few decades, another observer might survey the world and remark with equal confidence that “The faith is Africa, and Africa is the faith.” That person would be no less wrong than Belloc—but the error would be understandable. For decades to come, the world’s religious maps are going to be ever more African. 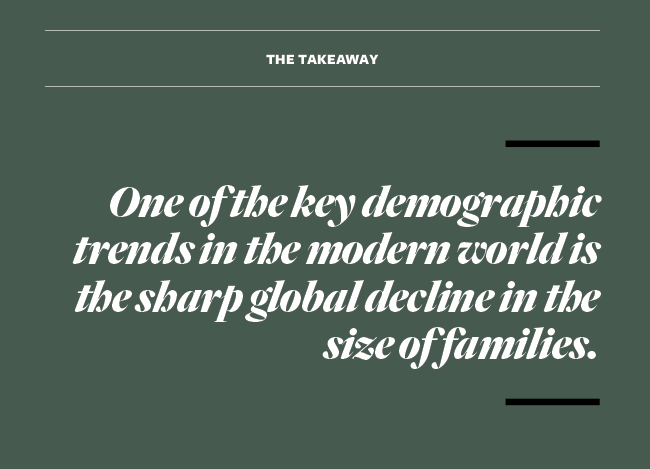 Philip Jenkins is distinguished professor of history at the Institute for Studies of Religion at Baylor University.