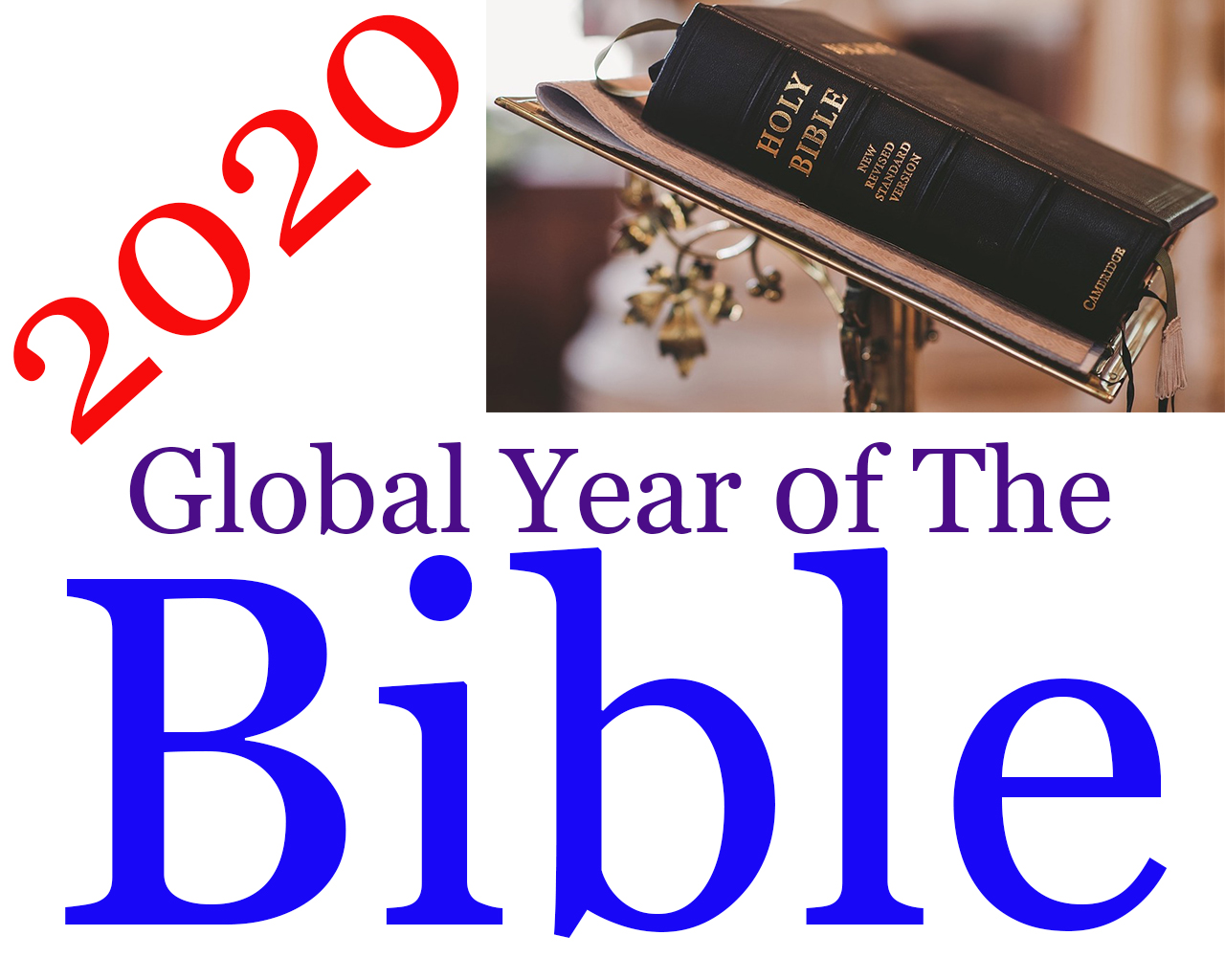 Luke 10: 25- 37 records a conversation Jesus had with a lawyer who came to Him with a trick question. To his question “ What shall I do to inherit eternal life? Jesus responded, “ What is written in the Law? “ How do you read It”? Then the Lawyer replied by quoting from the Torah. Jesus commended him for giving the right answers, but then directed him to put into deed the creed he just confessed. To this, the Lawyer wanting to wiggle out of commitment asked, “And who is my neighbor”?  It is one thing to read the Bible , but quite another to obey its teachings and precepts.

James 1:22 admonishes “But be doers of the word, and not hearers only, deceiving yourselves”.

The essence of reading the Bible is to  obey its teachings and instructions. And doing so is to recognize the Authority of the Bible to govern our lives.

Jesus Christ put a premium on reading the Scripture and obeying it. It was customary for Him to respond to questions ( whether trapping or sincere) from the religious leaders thus “ Have you not read ? Matt.19:4 or What did Moses command you? Mk.10:3. Referring to the Scripture. And to the Pharisees who questioned why His disciples were plucking  grains on the Sabbath? He replied, Have you never read what David did when he was in need and hungry? Matt.12:25. Again referring to the Scripture. To the religious leaders who were offended by the crowd cheering the Triumphal Entry, He questioned”Yes. Have you never read?” Matt.21:16. In a parable cryptically addressing   unbelief of the Jewish nation, He asked the audience,” Have you never read the Scriptures”? Matt.21:42. By posing these rhetorical questions, Jesus was not doubting their knowledge of the Scripture, but alluding to their failure to either understand the Scripture or accept its authority.

CHRIST’S KNOWLEDGE OF THE SCRIPTURE
Christ demonstrated a versatile knowledge and acquaintance with the Scripture in the various manner in which He answered questions by the religious leaders or individuals including the Devil. He , on each occasion, appealed to the Scripture and applied its doctrine as the final arbiter to each situation as seen in the issue of Marriage and Divorce Matt19:3-6. And on the disciples picking grains on the sabbath Mk 2: 23-26.His knowledge of the Torah.Matt.5:21-43; His knowledge of Old Testament cities and their past history Matt.11:20-24; He validated the story of Jonah and the great fish and confirmed the surpassing wisdom of Solomon Matt.12:40-42; During His temptation by the Devil, He consistently quoted Scripture Lu.4:1-13; He knew about the outstanding miracles associated with prophets Elijah and Elisha.Lu.4:25-27; He knew about  Old Testament martyrs, Abel and prophet Zechariah.Matt.23:35; He correctly applied Old Testament prophecies to specific events.Lu.4:16-21;Matt.21:1-5;12-13; Mk.14:27; 15:34. Even a remote and isolated prophecy by Daniel, The Abomination of Desolation, did not escape His attention Mk.13:14-20. In fact, He understood that the entire Old Testament was about Him Lu.24:25-27.

THE SCRIPTURE AND ITS AUTHORITY
The Scripture has both inherent and intrinsic authority because it is the word of God.The authority of the Scripture was not conferred by any Council or  the Church Fathers who decided on the canonicity of the books which comprise the Bible. On the contrary, it was the recognition of the intrinsic and inherent authority of each book that led to their being selected by the Church Fathers.

The authority of the Scripture has a divine origin as attested by internal evidence. Over 2,500 times in the Old Testament are repeated statements such as “Thus said the LORD” Isa.66:1. “ The word of the LORD came” Jer.16:1 “ The LORD spoke to Moses” Nu.9:1 “Then God spoke to Noah” Gen.9:8 .These proclamations by the Old Testament prophets were a testimony that they were not speaking their own words, but were oracles by which God communicated to the people.

The New Testament writers, in like manner bore a similar witness “ All Scripture is given by inspiration of God,” 2 Tim.3:16; “ Knowing this first that no prophecy of Scripture is of any private interpretation, for  prophecy never came by the will of man, but holy men of God spoke as they were moved by the Holy Spirit” 2 Pet.1:20-21.

Because of its authority, the Scripture demands and deserves unalloyed obedience. Being authoritative means that it is the ONLY rule for Faith and Practice. It is the (Canon) the Rule by which every doctrine and conduct should be measured.

THE REFORMERS AND THE AUTHORITY OF SCRIPTURE
The Reformers rejected the accumulated tradition and dogmas of the Church of Rome.and held onto SOLA SCRIPTURA (SCRIPTURE ALONE) along with other SOLAS of their battle cry. By Scripture Alone, the Reformers meant that the Bible overrides any and every other doctrine or opinion that is contrary to its teaching. The  Scripture for the Reformers is the final court of Appeal and arbiter in all matters of Faith and Practice . None but Martin Luther demonstrated  more what Sola Scriptura meant to the Reformers. In 1521, when he stood before the intimidating and hostile Diet of Worms, with his life hanging on a balance, and was being coerced to recant his books and writings. He mustered courage and responded :

Unless I am convinced by the testimony of the Scriptures or by clear reason ( for I do not trust either in the pope or in councils alone, since it is well known that they have often erred and contradicted themselves), I am bound by the Scriptures I have quoted and my conscience is captive to the word of God. I cannot  and I will not  recant anything, since it is neither safe nor right to  go against conscience. I cannot  do otherwise, here I  stand. So help me God, Amen.

CHRIST AND THE AUTHORITY OF THE SCRIPTURE
Jesus endorsed the authority of the Scripture when  He taught “ Do not think that I  came to destroy the Law and the Prophets. I did not come to destroy but to fulfill. For assuredly, I say to you, till heaven and earth pass away, one jot or one tittle will by no means pass from the Law till  all is fulfilled” Matt 5:17-18.  Jesus placed the authority of the Scripture above religious tradition or teaching of the elders. He repudiated tradition when He reprimanded the religious leaders.  “For laying aside the commandment of God, you hold  the tradition of men….All too well, you reject the Commandment ofGod that you may keep your tradition…Making the word of God of no effect through you tradition which you have handed down. And many such things you do” Mk.7:8-13 .

Jesus insisted on obedience to the Scripture alongside accepting its authority. Following His teaching and working of miracles, an unnamed woman commended him saying “ Blessed is the womb that bore You, and the breasts which nursed You”. To which Jesus responded,” More than that, blessed are those who hear the word of God and keep it”. Lu.11:27-28. He concluded His masterful Sermon on the Mount with the story of two builders- one wise, building on the rock.The other foolish, building on  sand. Matt.7:24-27. A powerful illustration of the importance of not just hearing, but obeying the word of God.

Jesus not only insisted and commended obedience to the Scripture, He showed vivid examples of living under the authority of the Scripture. He explained that Judas Iscariot,(though unredeemed) was not chosen as an apostle by error, but in fulfillment of the Scripture.Jn.13:18.His mighty works which incurred nothing but hatred by the unbelieving Jews were done in fulfillment of the Scripture. “ If I had not done among them the works which no one else did, they would have no sin; but now they have seen and also hated Me and My Father . But this happened that the word might be fulfilled which is written in their law’ They hated Me without a cause’” Jn.15:24-25. The perdition faced by Judas Iscariot was in accordance with Scripture. “ While I was with them in the world, I kept them in Your Name. Those whom You gave Me I have kept; and none of them is lost except the son of perdition, that the Scripture might be fulfilled” Jn.17:12. Judas Iscariot did not lose his salvation, because he never was saved, being a son of perdition according to the Scripture.Cf.Jn.6:70-71.; Acts 1:15-20; Ps.69:25;109:8.

Perhaps, the most outstanding example of Christ’s submission to the authority of the Scripture was during His arrest in the Garden of Gethsemane.. After rebuking Peter for acting impetuously, He said “ Or do you think that I cannot  now pray to My Father, and He will provide Me with more than twelve legions of angels? “ How then can the Scripture be fulfilled, that it must happen thus”.Matt.26:53-54. And to the crowd who surrounded to arrest Him, He asked, “ Have you come out as against a robber, with swords and clubs to take Me? I sat with daily you, teaching  in the temple, and you did not seize Me,. But this was done that the Scriptures might be fulfilled” Matt.26:55-56.

Because of its encompassing authority, the teaching of the Bible is binding on both believers and unbelievers alike, including those of non-Christian faith.

Jesus’s life as has been shown by Scripture, was a life lived in total fulfillment of the Scripture and submission to its authority. It behooves us as Evangelical Christians in the 2020 Global Year and beyond, to heed with utmost diligence the injunction of  Christ to the lawyer who started the conversation with Him “ GO AND DO LIKEWISE” Lu.10:37.

May we be consumed by the passion expressed in this ancient British hymn:

LORD, Thy word Abideth
And our footsteps Guideth
Who It’s truth Believeth
Light and Joy Receiveth

When our foes are Near Us
Then. Thy word doth cheer Us
Word of Consolation
Message of Salvation

O that we Discerning
It’s most holy Learning
Lord, may we love and fear Thee
Evermore be near Thee.

Is Man Getting Better or Worse?