by John Horvat II | It is time to return to the one true God from whom will come not a haphazard Miracle but many miracles provoked by the prayers of the faithful and his provident action.  (images: William M. Briggs)

“There is no God in this book.” Thus reads the provocative first sentence of Jonah Goldberg’s latest release, The Suicide of the West: How the Rebirth of Tribalism, Populism, Nationalism, and Identity Politics is Destroying American Democracy.

This declaration is perhaps an unintended summary of the book about the crisis in the West. From it, we might conclude that there are two ways by which we reached the present crisis.

The first is with God and is found in Genesis. God made the heavens, earth and man who sinned. History has since been a series of triumphs and defeats until we reached the sorry state of mankind today.

The second is without God, which involves, in Mr. Goldberg’s own words, human “animals who evolved from other animals who in turn evolved from ever more embarrassing animals and before that from a humiliating sea of ooze, slime, meats, and vegetables in the primordial stew.” We pulled ourselves out of this self-created muck and stumbled upon a liberal order that has given us both a prosperous society and the present moral disaster we now face.

Both ways require a miracle and faith.

The first involves a lesser miracle and the second requires a greater faith.

The Exhaustion of the Liberal Narrative
Mr. Goldberg has taken the more difficult path by defending the haphazard road to prosperous decadence. In fact, the book is a chronicle of what the author calls “the Miracle” that occurred around 1700. It was “a profound and unprecedented transformation in the way humans thought about the world and their place in it,” represented by the liberal ideas of the Enlightenment. 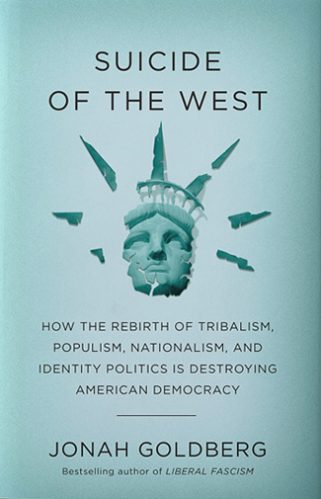 The Enlightenment narrative does not exclude the positive influence of religion on behavior, but it does preclude the active presence of God in public life. If one accepts this perspective, the author’s naturalistic explanation of our plight is reasonable. His book is like many others of this kind that now describe where we went wrong among the liberal path. He then reduces the problem to that classical clash within modernity, the “eternal battle” in which “almost every political argument boils down to Locke versus Rousseau.”

Thus, the solution consists of returning to the Lockean ideas of the Enlightenment that gave rise to the Miracle. And that is the problem with the book. Such an abstract solution appears unconvincing in light of the advanced state of decay that he documents. Despite Mr. Goldberg’s passion for the Miracle, his text shows that many do not share his enthusiasm or gratitude for it. It supposedly took us 230,000 years to stumble upon the Miracle; it seems too much to ask that we might re-stumble upon a quick fix during the next election cycle.

As authors like Patrick Deneen testify, the liberal Miracle is exhausted.

The Clash of the Two Miracles
The failure of the Miracle without God necessarily leads to the Miracle with him. This is yet another unintended consequence of the book. By clearly laying out the tenets of Enlightenment thought, those of us who do not subscribe to the Lockean (or Rousseauan) perspectives of our modernity see more clearly the real clash between the two Miracles initially mentioned. The author inadvertently points in the direction of solutions outside the modernist box.

Indeed, this clash of the two Miracles has always festered in the background of modernity. The failure of liberalism reignites the debate by forcing us to question our modernity and re-examine the radically different view of man proposed by the Church. Mr. Goldberg helps us by admitting that much of the liberal order’s foundational social capital came from Christian civilization. The book helps us see areas where liberalism and the Christian order differ. Three of these are a vision of man, society and Providence.

A Vision of Man
Mr. Goldberg’s liberal vision of man is quite severe. He writes that “The natural state of mankind is grinding poverty punctuated by horrific violence terminating with an early death.” We are naturally barbarians motivated by unrestraint and self-interest. This barbarism is hardwired into our DNA as the result of millions of years of evolution.

Unless restrained, he claims society will naturally degenerate into tribal loyalties, nationalism, and absolutism, with disastrous consequences to modern democracy. The Enlightenment’s unnatural and abstract structures served to rein in these natural bad habits and bring about the Miracle.

On the contrary, the Church teaches that man is made in the image and likeness of God (imago dei). As Saint Augustine states, we are created for God, and our hearts are restless until they rest in him. We are naturally attracted to the good, true, and beautiful that speak to us of God. By Original Sin, we tend toward evil also with disastrous consequences. By grace, we are drawn to God to overcome evil.

Again Mr. Goldberg’s perspective is severe. The Lockean outlook is individualistic and lives in tension with social instincts that favor intense loyalties. While the author acknowledges the role of the family and mediating institutions, the Miracle changed the way people thought about these relationships creating a framework in which institutions served to help make “each man a master of himself,” as each pursued happiness in a self-centered universe.

Without unifying principles, he claims that self-interest leads men to fragment into tribal associations that degenerate into power structures such as classes, identity groups, populist movements and intense national loyalties. From our distant primate ancestors onward, he says the evolutionary struggle to survive created these coalitions that hardwired into men an us vs. them logic that can be seen today in polarized and Trumpian America.

The Christian idea of community sees natural associations differently. Because of Original Sin, we depend on communities to supply our deficiencies and thus reach the perfection of our essentially and intensely social nature. The more intense the association, the better we can develop ourselves. United in Christian charity and a strong moral order, we naturally build associations and relationships to help us in the quest for sanctification. So important is community that any seclusion from the fullness of community life is seen as a personal loss.

The Role of God in Society
The final point of contrast highlights the sticky matter of God that was so callously excluded from the book in its opening sentence.

In all fairness to Mr. Goldberg, it must be said that he is not an atheist. He also does not deny the role of God in history. In the final chapter, he even acknowledges the great and unique role of the Christian God in helping to bring about the Miracle by defending universal human dignity. However, he believes the idea of God worked because it made man accountable for his actions. “The notion that God is watching you even when others are not is probably the most powerful civilizing force in all of human history.”

While we may believe that God watches our every move, he is not allowed to act upon his observations. The Enlightenment notion of God is that of the exiled watchmaker who set the world in motion and left it and humanity to itself. Religion is a mere framework for how people approach the world and establish their priorities and desires. Thus, the author observes that “We created the Miracle of modernity all on our own, and if we lose it, that will be our fault too.”

A Providential God
The Christian perspective is that of God as a provident, personal, and benevolent Creator. He intervenes in history. His Divine Providence guides and directs all creatures to their proper end. Ever mindful of man’s free will, God requires the intelligent cooperation of his creatures in carrying out his designs. He gives us his grace and supernatural gifts to aid in this cooperation.

That same Providence that directs the course of the affairs of each man with purpose and benevolence also directs and provides for the affairs of families, societies, and nations. This working with the action of Divine Providence makes up that fascinating narrative, which we call history.

Return to God
As modernity breaks down, it becomes increasingly more difficult to explain what is happening using its terms and methods. It becomes convoluted since nothing seems to work. The Miracle has not brought happiness or a material paradise on earth. Fallen are the gods of the modern pantheon—individualism, materialism, technology and so many others.

It is time to return to the one true God from whom will come not a haphazard Miracle but many miracles provoked by the prayers of the faithful and his provident action.

John Horvat II is the Vice President of the American Society for the Defense of Tradition, Family and Property and the author of the recent book Return to Order.

Contraception and the Manipulation of Language